Rules Broken (if relevant): be excellent

Part of Admin/Mentor Conduct Broken (if relevant): * Maintain a decent standard of professionalism when operating within the community. Insulting, harassing, or intentionally targeting anyone in our community is not tolerated.

Incident Description: Autisme made an event where 3 “air marshalls” are supposed to protect the station. on 9/11. I know Autisme isn’t american but this isn’t a “Bear Down for Midterms” kinda thing if you ask me. he also said "oh didn’t realize that was today lol" in dchat after “announcing” it.

why does it matter if today is 9th of September or not, for everyone in not America its just a normal day, their job titles weren’t Air Marshalls also 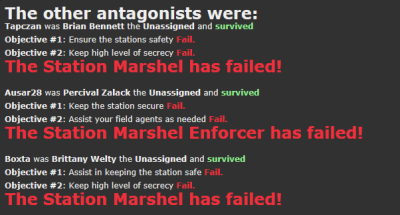 I do apologize if it did offend people, aswel as not being a very well thought out thing. I believe I have given my apoligies enough ingame.

Main reason I didnt realize was that 9/11 is not really a thing where I live, we dont get it on TV or anywhere else. I only realized it once you called that out ingame. and they where more intended a generic under cover police.

Yea but you should post the deadchat bit where you announce it, and use the term air marshall specifically. otherwise why would i even connect the two

I just rememberd a documantairy I watched once, it did not connect that today was that day !
specificly. doesnt help that dates are flipped here.

right but that deadchat though

It’d be one thing if this was intentionally malicious, but there’s no intent behind this at all. This is an honest mistake by someone who didn’t remember today was the anniversary of something that happened 20 years ago in a different country with no particularly substantial impact on other countries.

It made the news in other countries yes, but that’s all it was outside of the US.

Do you remember that the US dropped nuclear bombs on two civilian cities and then patted themselves on the back for ending a war and saving lives instead of owning up for what was not just terrorism, but terrorism on an unprecedented (and as of yet, still completely unmatched) scale? Yet we joke about nukes here all the time, and the station is equipped with one.

An apology for the mistake was issued and nothing else is necessary imo.

I could point out a bunch of comparisons too, but i mean if you genuinely feel he somehow randomly remembered air marshalls, on 9/11 and made an in-game event around it accidentally then i guess that’s it, thanks for your time.

Also yeah, i’m sure glad that happened, because it stopped the war and also happened about 60 years before i was born so why would i even give a shit?

wait, am i supposed to feel bad for shit my country did i wasn’t even born for?

Also yeah, i’m sure glad that happened, because it stopped the war and also happened about 60 years before i was born so why would i even give a shit?

Because you’re expecting someone from outside of the US to remember the anniversary of a US tragedy and expecting them to treat the day as a sacred holiday. The admin didn’t even realize what day it was before doing this.

I’m drawing the comparison because this was an absolute tragedy to a country outside of your own, but viewed as a heroic war victory from within your own country. You need to understand that to the rest of the world September 11th is just another day, that’s the point of it.

You’re right. It was just a huge coincidence. See ya Jan 17th, which is of no meaning to me.

hot buttered rum day how do you view the Warsaw Massacre?

I’m drawing the comparison because this was an absolute tragedy to a country outside of your own, but viewed as a heroic war victory from within your own country

At this point I might as well slap both of you for violating our rules against politics. The short of it is this, Autisme didn’t realize that today held in any actual significance because they are not American. They gave an apology which is all that can be expected here.