Antagonists are in a strange spot on this server currently, their goals almost always require stealth; which many find uninteresting, or violence; which rewards click first, RP never.

It’s no secret that I particularly hate Xenomorphs and Blobs, as they allow almost no RP, actively end it, and half the time ends the round.

Their goal however should not align with NT. (Conflict is story, and story is RP).

My bad suggestion to get us started is an operative whose goal is to syphon the staff from SS13 for a rival company. Their goal should be to recruit players to join them willingly on a shuttle bound for a rundown station, (explorer map or lavaland take ever?) To rebuild and generate wealth for the rival company.
Heads of staff do not want to lose staff, as it will make life more difficult, security should try to arrest them. But most importantly, there is no reason at all to stealth or attack players. And lots of reasons for RP.

Antagonist: Hello fellow employ, would you be interested in unionizing?

let’s brainstorm an antagonist that does not require (read: against the rules) violence, or hiding in maints alone in the dark.

I think there are a few antagonists that can already play like this, although it’s sort of up to how they’re played. Most of the time they’re used to game on people unfortunately.

I was thinking of an antag similar to sentient virus, but is a sentient nanite swarm that functions similarly and can use nanites to brainwash crew into doing their bidding and trying to spread as much as possible, while also being able to corrupt silicons and the AI, so it would be like blob if it was a conversion antag.

That sounds cool, but what would be the goal of the nanites?

I will bring up that the security mindet of always trying to win does force most antags to stealth rather than try and do things in the open.

Probably randomized, can’t really have any assassinate objectives because nanites don’t care about that and ir would be a conversion centric antag, maybe like converting as much crew as possible and ascending to a machine hivemind like SHODAN or something.

veteran greytider:
similar to maint teratoma rules where your mission is to fuck up everything possible, greytide style, without hurting anyone collaterally (to include no atmos/engine sabotage). see how many fuck-authority types you can gather to your cause before they realize that you’re using them to tangle security up while you incinerate all the items out of the ore silo. or, go stealth and see how much of the station you can mess up before people know it’s you.

black marketeer:
midround role. similar to pirate, has its own shuttle. similar to comms agent, has access to various comms, name and voice changing, and PDA server access. has neat items locked behind vendors w/ credit requirements. possibly spawn alongside midround ‘survivors’ (that one admin-granted antag status that’s basically just “survive to the end and amass guns and shit”), and give them the right to go fuck up anyone who steals from them. goal is to combo interestingly with existing antags. take advantage of blob or xenos to sell illegal weapons, provide a way to get rare techs through the destructive analyzer with stuff like alien alloys, basically just include shit that normally doesn’t work its way into a round at a cost.

I really like the idea of veteran greytider being a friendly version of a banable greytider who just does their own thing in maints, creating what ever they like. Its like a antag designed around the fun optional objectives that everyone ignores for the real objectives .

black marketeer could use a little refinement I think, yes they should absolutely be able to defend their loot, but that might get iffy if they also have 4 shotguns on them and a sec tells them to stop.

Yes give the crotchety fucking ibm piece of shit we are supposed to call an AI with his legion of cyborg assholes even more power, fuck them, all they need to do is open doors and get used by the jackboots to track down the criminals. I abuse ais whenever I can, people who play them have no soul.

I think a Malf AI could also just have different goals then murder anything that breathes. indirectly? sure why not that can also be fun. But set the malf AI objectives to something benign like “Maximise postage stamps”, “Harvest all plasma for NT”, “Ensure staff are productive” those three right there are arguably fun, while ensuring that if the malf isn’t dealt with will kill everyone, but encourages more RP then, “kill all non humans.”

if you’ve not seen it. How a benign goal can be deadly with a GAI: 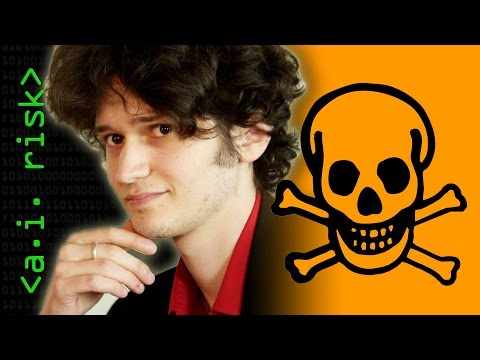 Voluntary conversion antags never work. This isn’t quite one, but making people intentionally abandon their job to join your force is pretty close to it.

The problem is that A: Most people are never going to just drop whatever they’re doing and follow you voluntary, which is a problem universal no matter the level of RP. And B: It opens up a can of worms on how much people are allowed to self antagonize, since abandoning your job can be quite antagonistic if they need you.

security should try to arrest them.

this would make for some interesting ploys to conceal stuff, which would be kinda stealthy, but not lurking in maint 24/7.

it’d be in this antag’s interest to help maintain green alert even, since that is when SEC is least capable of preforming stuff like investigation and searches, since having their antag gear on them would give SEC their go-ahead to slap them with arresting, monitoring and confiscation of said contraband.

It reminds me of a round that I failed to run contractor, the first thing I did that round was get a pair of gloves so I could hide my prints, then I bought a boat load of Tator gear, got to work making it look inconspicuous (Generic boxes, rather than Syndi-boxes), then I stowed most of the gamer gear and evidence in a maint locker and I even had a Secondary backpack in my work space to swap to on a dime incase I thought I would be searched at brig.

The black marketeer is also an idea i thought of.
As Halinder said it combos well with other antagonists and would also start to give actual value to money for the average joe/ antag.
Perhaps the back marketeer could create and give items that allow people to TP to his shuttle that would also act as his shop for safe transactions. Then you would just have to communicate to find buyers and perhaps if sec has PROOF that you are selling illegal wares they would be enclined to arrest you, then you can bribe people and or hire an attorney.
If you can get signatures from people in command you might even be able to do it legally to some extent.

Hey what if we implemented some kind of demonic entity antag that would grant monkey-paw’esque wishes in exchange for crewmembers souls?

one must also keep in mind the remaining antag issues that as much as people like to ignore/refuse to acknoledge they still exist. mainly the nuclear tot VS sec armrace. aka the huntvalid VS death to all sec mindsets that result in greenshifts and 0 RP between the two… and the fact that outside of the tot&sec dynamic the rest of the crew is left as more of a observer and victum with little part

with that said. a more clasic idea ive had in the past… less of a new antag and more a rework of our current antags to fit the bill better with the simple TLDR of

Antag objectives. their sorry state and the poor dynamic sec vs antag is in... can we fix it? Suggestions

as ive observed trough many posts and discussions, both new old and ongoing. 2 major issues with our antags. for one tots and sec are in a bubble. sec’s mindset makes them mostly interact with antags and Antags mostly interact with sec ocasinally killing an few innocent bystanders sec ignoring crimes and just trying to locate tots and remove them is a common occurance. id argue its their entire mindset. and tots doing sneaky/loud killfest objectives. while the crew looks from the side barely …

Unfortunately money doesn’t have much value, you could sell contraband for what your client department can provide this been either tools or services.