Accurately Named Naming Guidelines (who would have guessed)

Guideline
Noun
Information intended to advise people on how something should be done or what something should be.
“Guidelines are recommendations that guide for best practices and behaviors, whereas rules are lawful and permanent guidelines that one must follow…”

Just… Stop following them as a set-in-stone rule. If it’s not a memey name let it fly. This is the only server that enforces naming as a rule and not a suggestion. Or, alternatively, rename them to naming rules so we don’t have to endure the numerous complaints all the time.

Just… Stop following them as a set-in-stone rule.

We’ve had a lot of names that have been removed despite being roleplay-friendly and in fact have been some of the best roleplayers on this server, because Crossed and most staff have a hard-on for naming guidelines that end up regularly restricting roleplay instead of encouraging it. Cordswitch Bos was a name that had backstory behind it, organically done in-game. Truthbringer was a moth name that sounded completely fine to the guidelines and was roleplayed as such but because we bind the community to them so hard it got reported and removed.
Who’s gonna be next, ya’ll? When can people just have fun without absurdly dumb rules ruining their character?

Not everything is black or white. the guide can stay the same, say “use a lore friendly names” and there be no rule that you must follow them to a tee.

I didn’t miss the point of the post, I just disagree with it and don’t think character names are sacred just because you came up with the name while disregarding species naming. (This thought of disregard is not relevant to the two names quoted below, but more on a broad scale)

This is the only case of a name I am aware of that had substantial backstory and effort towards RPing that caused the special snowflake name to make sense.

Even so, it still could have been the same character but named Cordswitch and maintained that same backstory while complying with the guidelines.

Do you have any other examples of moths that gave real effort to RP a serious attachment to their namesake? These both did and were great folks for it, don’t get me wrong.

“use lorefriendly name” is a little too vague considering we have jackshit in the way of lore to be friendly to, but i do agree with the sentiment of our guidelines mostly punishing tame breaks. There are a lot of human names that cause immersion breaks that go unchanged because they’re “not technically against the rules” whilst moth players kiss goodbye to their recognisable names

Even so, it still could have been the same character but named Cordswitch and maintained that same backstory while complying with the guidelines.

Still missing the point, stop touching my character when it’s not yours.

stop touching my character when it’s not yours.

Ruko, please.
I genuinely think we’re being too draconic with our names. It’s gotten to the point where we’re hurting people who are actually trying to roleplay and even put effort towards writing a backstory that explains their name and gives meaning to it.

Is it any wonder with an attitude like this so many players left Bee?

So it begins. The Second Great Naming War.

And I am not even done doing naming guideline reports…

I genuinely think we’re being too draconic with our names.

And I don’t disagree with that at its core, but I’m not sure how exactly to resolve that issue.

Both Cordswitch and Truthbringer got admin approval for their names as well, so I also don’t disagree with them either - they believed they were following guidelines and had both the RP and the backstory to support their namesakes. I offer compromise and get shat on for even trying, I’m going to respond in kind.

I do disagree with the majority of people feeling entitled to their names that made with total disregard for what little lore we have, and I don’t like seeing someone with a special name they can’t explain and doesn’t actually do anything for them or their character - it’s just a name they liked. That’s just lazy.

That is the actual majority of names that are getting changed from my experience.

I do disagree with the majority of people feeling entitled to their names that made with total disregard for what little lore we have,

You mean the lore we didn’t make that the people who made it literally don’t enforce? 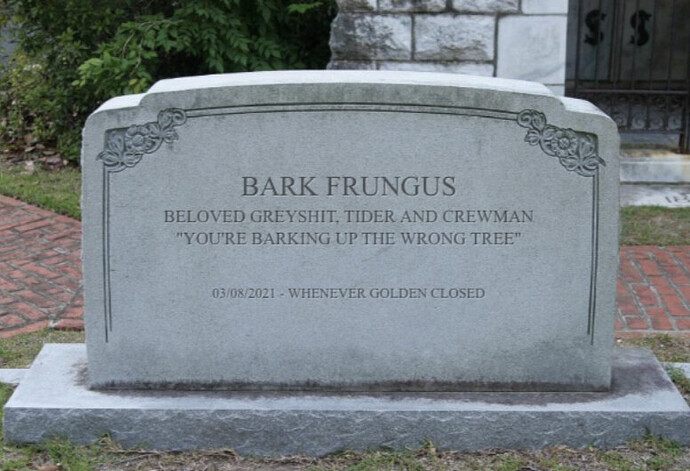 There is but one man who can save us now. Grab your shovel, brothers. And prepare for the clone wars

Sure seems like they are trying now, and they have to put down a rebellion against enforcing it in the process.

rebellion is a little harsh. People are allowed to disagree with the rules when they think they’re too strict. I’m not saying that every name deserves to be valid, there’s a lot that are rightly banned, but when Truthbringer is banned in the same report that deems Bobert Spoonman as valid then I feel like our rules are a little backwards

The is a reason why we have judges and juries in law. It’s something that online moderation is missing. It should never be about the wording of the law but the spirit of it.