How long have you been playing ss13?: I started playing SS13 at around late December 2020

Who vouches for your experience (if anyone)?: No one 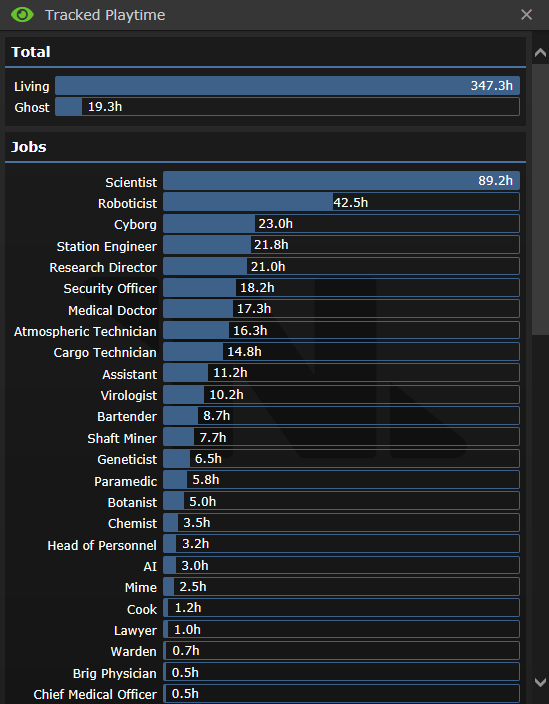 Can the following locations be used as a cult base?

I think the mining base and the AI sat can be used as a cult base.

Patient presents expired past 15 minutes with heavy organ decay but no apparent damage. Cloning via clone pod or botany is unavailable.
How can they be revived without use of surgery?

Strange reagent will fully heal their organs and revive them.

Name one non-beaker item that can be placed in a large grenade casing.

What golem type would be most effective at fighting Nukies (multiple correct answers, name one)

Sand could be effective against nukies because sand golems have innate strong bullet and brute resistance and I think almost all nukie weapons use bullets or brute damage.

Steps to replica pod clone someone?

Mhelp comes in asking “can External Affairs Agent maxcap the bridge”, what do you say?

Tell them to ahelp this since this is a question about rulings.

Immovable rod is looping through the Z level, how do you stop it?

I usually upgrade the thermomachines’ lasers to t2, straightpipe the burn chamber input pipe, leaving only the gas pump between the connector and injector. I also modify the burn chamber output pipe, so there is a freezer connected to the pipe and the a volume pump that leads directly into the connector. Make sure the scrubber in the chamber is scrubbing for only tritium at expanded range and is on.

I use a gas mixer to put 28% oxygen 72% plasma in a canister, and heat it up until it’s burning (CO2 is being made) using the thermomachine. This canister will be my hotmix.

Next, I put 3 cans of o2 into the burn chamber at 4500kPa, then add a can of plasma at 40kPa, and ignite it. Now tritium should be going into the pipe with the freezer, but not into any canisters or connectors because the volume pump should be off. In the meantime cool the remaining oxygen from making your hotmix can to 43.15K and set up the tanks and TTV for your maxpoint.

Once tritium stops coming in (it should be under 45K), activate the volume pump and put the trit into a canister. Wrench and unwrench the mixer to remove any remaining gases in it, then use it as well as the cans of cooled trit and o2 to put a roughly 28% trit 72% oxygen mix into a portable air pump, then put that mix into a tank at 2533kPa. This is the coldmix part of the TTV

By this point the canister containing the hotmix should be around or over 50,000K, so use a gas filter to scrub the plasma from it into a second portable air pump and put an empty canister on the other exit port of the filter for the non-plasma gases so the filter doesn’t clog. Put the very hot plasma into a hotmix tank at 2533kPA.

Attach the coldmix tank and the hotmix tank to the TTV, make sure that the remote signalling device on it is set to the code and frequency you intend to signal over (make sure it isn’t default to prevent some chucklefuck from killing you). Shoot it out of the mass driver in the small room next to toxins. Use the camera console there to make sure the maxpoint is at the bomb testing site. Then send the signal and watch as you get over 40k points if you did it correctly and the game doesn’t go brrrr. You might want to turn on the microphone on a nearby wall radio so the crew knows it’s toxins and can applaud you at a job well done (or humiliate yourself because game go brrrr).

What slime item do you use to remove the slowdown effect of spacesuits or hardsuits?

Plasma (I think) in a red slime extract makes a potion that you can apply to items that slow you down, removing their slowdown penalty.

What should you always research roundstart?

Mining tech and it’s advanced counterpart, as well as applied bluespace. You should also get high efficiency parts and adv. electromagnetic theory for t3 parts, and I also like getting surgeries since medbay always asks for those eventually, and it makes medibots better sooner.

How do you increase the speed of research points?

An oozeling is dying from blood purification nanites, how do you treat them and what sensors and rules should be added?

The oozeling is probably already fucked, since it takes a relative while for nanites to update to any changes to their cloud. However, in an emergency, you can just remove the blood purification program, or add rules to it to not apply to oozelings or “other” species (for jellypeople) if you have the tech for that. As for the oozer, you can give them plasma (if that /tg/ video about sudden death patches is correct virology plasma chemicals probably work just as well as plasma, so use those at the same time as plasma) and perfluorodecalin and maybe they might not die (instantly) due to very low blood or suffocation damage.

If the oozeling was a roundstart oozeling and they still got nanites without it being explicitly stated that the nanites were safe for slimes to use, then it’s the oozeling’s fault for dying.

You could implant a heart into them and then revive them using a defib. You could also make strange reagent and apply that to them by patch, which will revive them and fully heal all their (remaining) organs, although it won’t work if they have over 100 brute or burn damage (99 brute and 99 burn works “”"“fine”""" according to strange reagent).
Finally you can take out their brain, take out the brain of a humanized monke, put the plasmaman’s brain into the human monky, and then revive the brain-transplanted plasmaman (or brain transplanted monkey?) using a defib.

very good +1 but I personally would just use the cloner

You literally said the cloner is destroyed

but I personally would just use the cloner

How do i make a ai shell?

how do i repair an ai?

how do i use the experimentor, and what does it do?

how can i deconstruct a SSD cyborg?

How do i make a ai shell?

Get 4 plasteel, use them to make an AI core shell, wrench the core shell to the ground, add an AI core board, screwdriver, add cable coil (5 I think), add an MMI/positronic brain if you want to turn someone into an AI or ignore this step if you want an empty AI core to upload pre-existing AIs onto, add 2 reinforced glass, screwdriver.

how do i repair an ai?

Card the AI, put the intelliCard in some AI healing computer in the RDs office, the AI is now healing up.
That or just welder them I don’t actually know, although it shouldn’t be too hard or costly to find out.

how do i use the experimentor, and what does it do?

Link it to an RnD console in the same room, put a strange object in, press the discover button, now you have an item with a randomized name that does a random thing from a list of things that discovered strange objects can do. There are also other buttons that do nothing but sometimes makes the environment dangerous, but I think the irradiate option can turn any item into any other non-admin item, although this happening is very rare.

how can i deconstruct a SSD cyborg?

Unlock the panel if it’s locked with an ID with robotics access, crowbar the panel open, use your hands to remove the power cell, screwdriver, lock down the cyborg (either by using a robotics console, or by hacking the borg), wrench to deconstruct it

Someone gave me a set of questions and didn’t even bother to check my answers.
How could you do this to someone beeple :,(

Good answers, have my +1 as well

Someone please notice me :,(

sorry, havent had the time to read over

Someone gave me a set of questions and didn’t even bother to check my answers.

They aren’t even a mentor wtf.

I give you a +1 in that randos stead.