3 major self-antaggers on what was in effect a greenshift

Rules Broken: No Self-Antag, Escalation Policy, including not killing people before the round ends
.

Incident Description: Rebel Trouble repeatedly ran around in full riot gear attacking me (HoP/acting cap) and the HoS unprovoked with a fire axe, then later, a disabler, despite the fact he wasn’t an antag, to steal things from us to the point we thought he was an antag.

Self-antagging includes damaging the station, attacking other players without a valid reason, and subverting the established chain of command as a non-antagonist role.

Attacking people, especially heads, because you want their gamer gear isn’t a valid reason, especially when you do it over long periods of time and permanently break into several places with the axe until you get your precious AA.

He also destroyed the reinforced window in front of my AA computer which made it so I couldn’t do my job anymore because anyone could just click the computer at that point and steal all the IDs.
.

The mime, who was also not an antag, loaded up with a shotgun and beanbag slugs (not sure if new or couldn’t get real ammunition) but he literally ran into my office and tried to kill me with his shotgun. Later when someone asked for extra access (so I gave them shit like medbay and a couple others so they would have more freedom) they knocked the guy over and stole him modded ID thinking they were getting AA. Unbased, and self-antagging.

With neither of those people did I initiate the conflicts, it was pretty much them coming at me with deadly weapons first time no dialogue, no provocation, like they were antags.

Third one, I had placed Ian (in his little box) on the engineering escape pod and told the guy he would have to lay down BC I was going to save the AI and put the AI in there; AI didn’t want to leave for whatever reason and when I got back to the pod, not only was it full, but Ian was tossed out the back with the door open on his cage. (Thankfully you have to manually click the floor or something to release him.) I crawl into the escape pod with Ian and make sure to close the door, and unbuckle the jerk who tossed ian out the back to also try and take his chair. Shuttle goes off, I unbuckle him like once or twice more, and he just fucking goes ham with his wrench and beats me into hardcrit where I was 20 seconds from dying when the shuttle docked. Wasn’t an antag, tried to kill me despite me not attacking him or even remotely being a threat (no blood and nobody shouting on comms I was antag), and in spite of the fact the round was ongoing and I was a Head of Staff.

Rebel Trouble ran around attacking the HoS and acting Cap unprovoked all round, breaking things and making it impossible for HoP to do his job.

Mime ran int my office and tried to kill me with beanbag slugs.

Engineer beat me into hard crit where I was maybe 2 smacks away from death because I unbuckled him a few times on the escape pod.

None of them were antags.

The real antags were nukies and they committed suicide or went SSD roundstart for some reason, so it was effectively an LRP greenshift.

Went back and checked the logs, and although he came at me with the axe he didn’t directly attack me with it. But he did attack a borg, the AI said so over comms. Still a lot of self-antagging because half the time he was literally destroying things to get around, and the attacking HoS and I, and a borg.

Several things wrong here, I went into security and got attacked by a security officer, So I took his ID and went into armory while no one was there. I did not attack HoS at all, when I saw him I walked past him UNTIL he decided to randomly follow me after I ran past him several times during the round and try to stun gun me with his multiphase gun.

You also attacked me first, I broke into bridge and you attacked me with a disabler first. Then a borg came to your rescue. I also attacked the borg with a flash only because he was trying to stunbaton me when he kept chasing me in maintance

Some detail is missing here, what did you attack him back with?

Silly of you to assume that a greenshift would have no antags.

He attacked me with a minature energy gun, I attacked him with an energy gun back, the axe was never used to hurt any of the security team. I only used it to break into places

Because you rushed me with the Fireaxe and were destroying doors I misremembered that you had actually attacked me with the gun. Regardless, you literally destroyed your way into the armory, attacked me unprovoked as well as the HoS (I’m not the HoS so I don’t know about when he was by himself but when we were together you initiated with both of us unprovoked). You also repeatedly went after both of us, and did a few things that made it impossible for us to do our jobs (you literally opened up the brig to everyone who wanted in) and you destroyed the window in front of my id console making it so that anyone could just yoink the cards inside, making it impossible to do my job.

Self-antagging includes damaging the station, attacking other players without a valid reason, and subverting the established chain of command as a non-antagonist role.

You did all those things.

Some detail is missing here, what did you attack him back with?

Not sure who you’re asking but when I got rushed by a guy in full riot gear and a fire axe who was busy busting down the door to the cap office where I was, I used my disabler to try and stop him.

I did not rush you with a fire axe, I hit Captain’s door a few times with the fireaxe and YOU CAME OUT shooting. You, HoS, The Security Officer, and Borg were not attacked unprovoked and were not attacked with lethal intent. You opened yourself up to nonlethal offense when you guys attacked me.

Self-antag does include damaging the station but not B&E. I broke a few windows and 2 doors I believe. A good example of self-antag would be breaking windows to space, disregarding that you’re venting the station.

Some bullet points so listen: 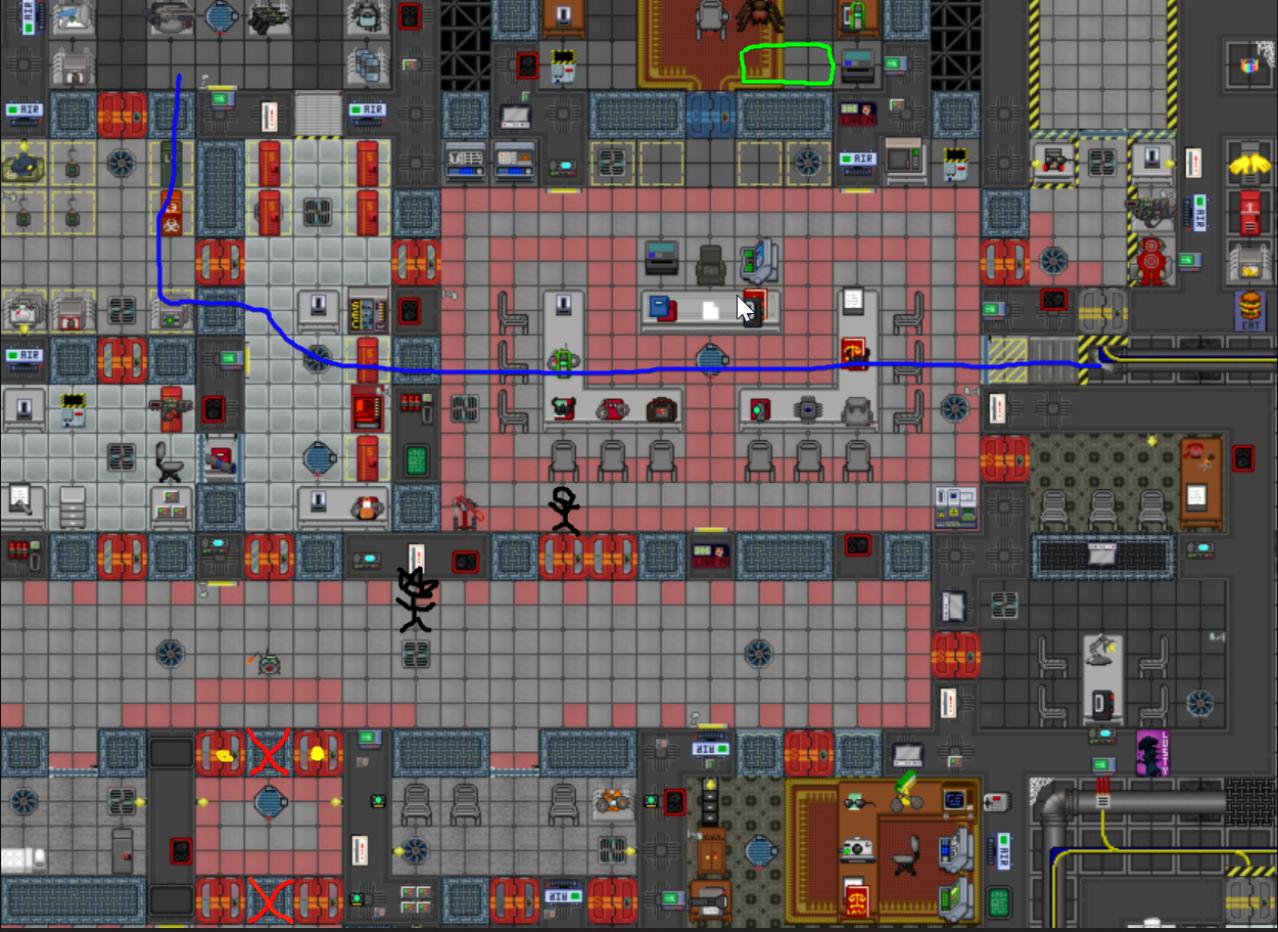 If I made a mistake and this was Box station, it doesn’t make a difference since brig in both box and meta are extremely similar

yeah ur right in LRP you can defend or even kill someone when you get hit first. Its called becoming valid and breaking caps door doesnt make you valid